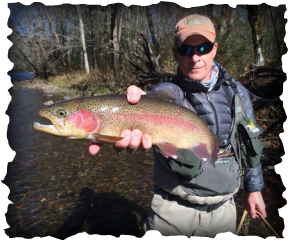 Bryan grew up spin-fishing the lakes and streams of Ohio, chasing big Walleyes and Smallmouth Bass. It wasn’t until he relocated to NC in 1994 and watched a casting demonstration by Mac Brown that he realized his true passion: flyfishing for trout in the NC & TN mountains. Bryan’s love for the outdoors and passion to excel led him on a fast and furious fly fishing adventure, covering several states including NC, SC, TN, GA, MI, MT, CO and the Florida Keys!


Bryan served for 3 years as 1st Vice President of the Rocky River chapter of Trout Unlimited, and he is an original board member of the Carolina Fly Fishing Club.
Bryan has contributed many hours helping Boy Scouts obtain the flyfishing merit badge and receives the greatest satisfaction from teaching children to fish.